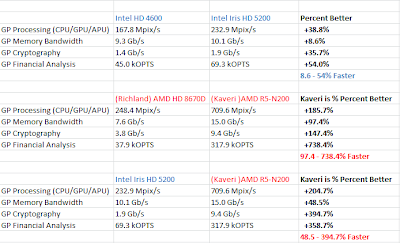 This Speaks for itself!

Kaveri's GPU is essentially an underclocked 7790 with DDR3 instead of GDDR5 with only 1 CU disabled. This means Kaveri's GPU will sport 832 Stream Processors and overshoots the original estimates and rumours of 512 stream processors by alot! Stock clock will be 600 Mhz but there is no word if there will be a turbo clock implemented but my guess is YES! :)

What do you guys think?