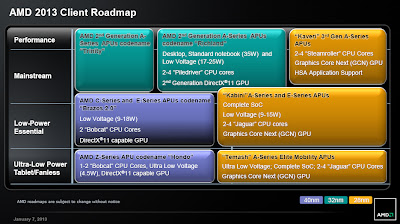 We see some interesting new information through this brand new roadmap. Not only will AMD's new flagship 28 nm Temash Tablet SoC sport four Cores, yes FOUR cores (not two as previously reported), but it will be released in the end of Q2 beginning of Q3 2013.

Another interesting note is to see that steamroller is alive and well and is said to be released in its APU form later this year in Q4.

Good to see K10.5 still kicking with an even more tweaked core known as Jaguar, which is said to bring over 15% increase in IPC performance, and over 10% higher clocks over previous Brazos core.

No Desktop Flagship Steamroller this year guys! We'll have to wait and see how AMD pulls this one off in Q1 2014, during which all Soc/APU/CPU's will move towards Steamroller/Excavator core design.

So which Tablet SoC will prevail in CPU performance, how about GPU?

AMD's 28nm Temash A Series 4 core based on the much improved Jaguar Core?
AMD 8270